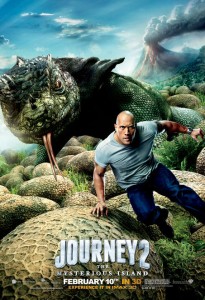 I have really enjoyed the two Journey films based on adventures to the places written about by Jules Verne.  Journey to the Center of the Earth 3D was an excellent adventure, and Journey 2: The Mysterious Island took things to the next level with some really fun sequences and some scenes that were entertaining more than they were cheesy.

Now comes word that there will be a third adventure, rounding out a trilogy of adventure films.  The studio is currently targeting a 2014 release for Journey 3.

Here is some more information from The Wrap:

According to reports, the characters played by Josh Hutcherson and Johnson in the last installment return in “Journey 3.”

Director Brad Peyton and screenwriters Brian Gunn and Mark Gunn have signed on for the third film.

“Journey 3” is produced by Beau Flynn and Tripp Vinson and Charlotte Huggins.

It’s probably too early in development to know whether Michael Caine, Vanessa Hudgens, Luis Guzman and/or Kristen Davis will return for the third installment.

Director Brad Peyton commented to Heat Vision: “I grew up a fan of Verne, so I know a lot about the mythologies.  Mysterious Island was one of eight or nine really seminal works. I know we’ve just scratched the surface of what we can do. This one’s going to be a lot bigger. We’re going to go to a completely different world. It’s just going to be a bigger experience, and we’re going to grow the mythology. Journey 2 was about rebooting a franchise; now it’s about making the seminal work in the franchise.”

‘Bridge’ to stardom for child actors

Only actors who have worked to establish their characters fully can move a fantasy-adventure audience to tears. The fact that Josh Hutcherson and AnnaSophia Robb manage to do just that in Bridge to Terabithia is […]

New Line and Walden Media are putting together the sequel to Journey to the Center of The Earth, and sources said that Brendan Fraser is definitely teetering. The reason: the studio wants to make a […]

Canadian composer Andrew Lockington has landed his most prestigious scoring assignment so far: New Line Cinema and Walden Media’s Journey 3-D, based on Jules Verne’s book Journey to the Center of the Earth. The film […]