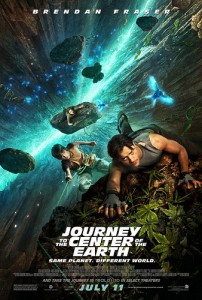 But on an expedition in Iceland, he and his nephew stumble upon a major discovery that launches them on a thrilling journey deep beneath the Earth’s surface, where they travel through never-before-seen worlds and encounter a variety of unusual creatures. “Journey to the Center of the Earth 3D” is directed by Academy Award-winning visual effects veteran Eric Brevig (“Total Recall,” “Pearl Harbor”) from a screenplay by Michael Weiss and Jennifer Flackett & Mark Levin. The film is a co-venture between New Line Cinema and Walden Media.

Supplements shared between the Blu-ray and DVD include audio commentary with Frasier, a trio of making-of featurettes and the "Adventure at the Center of the Earth Challenge" interactive game.

Exclusive to the Blu-ray is a Digital Copy of the film (in 2-D and standard-def only). (In keeping with New Line’s current Digital Copy strategy, the disc is not Mac compatible.)

Suggested retail price for the Blu-ray has been set at $39.95.