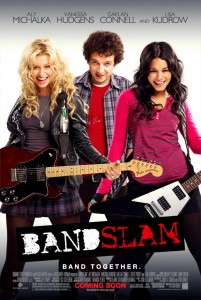 Someone to Fall Back On

Todd Graff, the writer-director of the indie film “Camp,” will further investigate the pathos of adolescence in the comedy-drama “Bandslam.”

The project centers on a high school outcast and a popular girl who form an unlikely bond through their shared love of music. Assembling a like-minded crew of misfits, the friends form a rock group and perform in the battle of the bands competition at their school.

WILL BURTON (Gaelan Connell) is used to being bullied or completely ignored by his schoolmates, so when cool and popular former cheerleader CHARLOTTE BANKS (Alyson Michalka) starts inviting him to hang out with her, the quirky teenager is stunned and so is his doting single mom KAREN (Lisa Kudrow). Impressed by his eclectic knowledge of music, Charlotte, a gifted singer-songwriter, asks Will to manage her fledgling rock band. The goal: go head to head against her egotistical musician ex-boyfriend BEN (Ben Wheatley) at a regional battle-of-the-bands.

Unsure of what he’s getting himself into, Will agrees to help Charlotte’s off-beat trio, eventually expanding it with a crew of like-minded outcasts. Against all odds, the group’s sound starts to come together and their prospects for success look bright. Even more amazingly, Will’s loser status finally seems to be a thing of the past; he even has a potential romance brewing with a kindred spirit named SAM (Vanessa Hudgens), a classmate with untapped musical talents. But when Charlotte is faced with a family tragedy, she suddenly breaks off her friendship with Will and quits the band, leaving their competition chances in tatters. With Will’s new-found self-confidence on the ropes and the contest almost upon them, he and the band must choose whether to admit defeat or face the music and stand up for what they believe in.

Will Burton has an uncommon chance to start his short life all over again. In a different town, at a fresh school, with the prospect of new friends, this formerly miserable teen misfit has got one shot to reinvent himself as the person he always wanted to be in BANDSLAM, a music-fueled comedy about the things people do to figure out who they really are.

Disney superstars Aly Michalka (Super Sweet 16: The Movie, Aly & AJ in Concert) and Vanessa Hudgens (High School Musical 1, 2 and 3) join with rising young star Gaelen Connell (Chocolat, A Dirty Shame) and popular comedian Lisa Kudrow (“Friends”) in this upbeat and funny teen tale that navigates life’s big dilemmas between friendship and romance, gossip and truth, jealousy and loyalty, dreams and reality, all the way to the biggest battle-of-the-bands competition in the country.

It all begins when Will (Connell) moves to New Jersey, happily leaving behind his perilous life as a daily target for bullies in Cincinnati. Even Will has to admit things start out better than he imagined, when he makes an impression on two very different girls: the shy, offbeat, bookishly alluring SA5M (Hudgens) — which she pronounces Sam, explaining that “the 5 is silent” — and the cool, popular Charlotte Barnes (Michalka), the talented ex-girlfriend to the lead singer of the school’s hottest band, Ben Wheatley and the Glory Dogs.

When Will reveals his encyclopedic knowledge of music, from classical to punk, he is tapped to manage Charlotte’s fledging rock band and help them secure a spot in Bandslam, a battle-of-the-bands showcase she hopes to use to get back at her ex-boyfriend. Only now, Will’s world turns totally upside down. He may have lost his loser status but he finds himself in the middle of rivalries, jealousies, secret revelations and betrayals he never saw coming. When sudden changes threaten to break up the band and unravel all his new relationships, Will is tempted to do what he’s always done – pack it in — but this time he’s going to face the music.