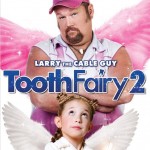 About the Movie: Larry Guthrie is a fun-loving guy with a serious mission: to win back Brooke, the love of his life. But when Larry upsets a small boy with a loose tooth where Brooke works, he’s “sentenced” to become a real tooth fairy. It’s tutu-times the laughs watching Larry strut his stuff in pink tights and ballet shoes as he tries to restore the boy’s faith before Brooke marries the wrong man — and he only has ten days to git-r-done!

I can’t believe that I hadn’t heard of this until now.  A direct to video sequel to 2010’s smash-hit (?), Tooth Fairy, which starred Dwayne Johnson, Billy Crystal and Julie Andrews, has been in production.  […]