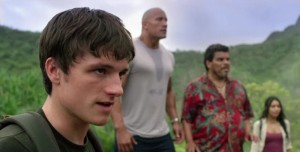 I’m a fan of the first Journey to the Center of the Earth with Brendan Fraser, though I was a bit skeptical of the sequel after he didn’t return. That said, I enjoyed most of the trailer for the sequel. There were only a couple of things in the trailer that I wasn’t too fond of, but at the very least it should prove entertaining. It definitely looks like it’ll be better than Zookeeper, but that doesn’t say much. I think it looks like it could be on par with the first, and that’s good enough for me.

The new adventure begins when young adventurer Sean (Josh Hutcherson) receives a coded distress signal from a mysterious island where no island should exist–a place of strange life forms, mountains of gold, deadly volcanoes, and more than one astonishing secret. Unable to stop him from going, Sean’s new stepfather (Dwayne Johnson) joins the quest. Together with a helicopter pilot (Luis Guzman) and his beautiful, strong-willed daughter (Vanessa Hudgens), they set out to find the island, rescue its lone inhabitant and escape before seismic shockwaves force the island under the sea and bury its treasures forever.

‘Bridge’ to stardom for child actors

Only actors who have worked to establish their characters fully can move a fantasy-adventure audience to tears. The fact that Josh Hutcherson and AnnaSophia Robb manage to do just that in Bridge to Terabithia is […]

At last, here is the first preview of the new Ramona and Beezus movie in High Definition! Official Movie Website: Ramona And Beezus