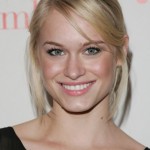 Leven Rambin (“The Hunger Games” “Grey’s Anatomy”) has been cast as the female lead in “Mavericks,” opposite Gerard Butler and Jonny Weston.

Based on the true story of Jay Moriarty’s rise to the forefront of big wave surfing, “Mavericks” will feature Rambin as a California surfer girl who is Moriarty’s best friend and the object of his adoration. Weston will play Moriarty and Butler is portraying Rick “Frosty” Hesson. Moriarity sought to ride the iconic Northern California break known as Mavericks, where winter swells bring in treacherous waves the size of five-story buildings.

The film, which has yet to be titled, will begin shooting in and around Santa Cruz in the middle of October. And Walden Media, the film’s producer, is looking for Santa Cruzans to take part […]

Walden Media has tapped Curtis Hanson to direct surfing drama “Mavericks,” with Brandon Hooper and Jim Meenaghan producing. The story, based on Hooper’s script, centers on the late Jay Moriarity and his quest to ride […]

Michael Apted to finish directing duties on Of Men and Mavericks

After experiencing health complications from a recent heart surgery, director Curtis Hanson is getting help to finish the principal photography on Of Men and Mavericks, the Walden Media drama about big wave surfer Jay Moriarity. […]