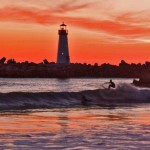 The film, which has yet to be titled, will begin shooting in and around Santa Cruz in the middle of October. And Walden Media, the film’s producer, is looking for Santa Cruzans to take part in it.

The film is reportedly focused on the relationship between young Moriarity and his longtime friend and mentor Frosty Hesson. Scottish-born star Gerard Butler will take on the role of Hesson, and Moriarity will be played by up-and-coming young actor Jonny Weston. The script was written by Brandon Hooper, who himself has a background in surfing.

Several hundred locals will be needed to be extras in the film, a drama about the life of the young surfer who died in 2001 a day before his 23rd birthday.

The film’s cast and crew, led by “L.A. Confidential” and “8 Mile” director Curtis Hanson, will be in town for two weeks beginning Oct. 10.

“I’ve read the script,” said born-and-raised Santa Cruzan Joel Domhoff who is working as the film’s promotional extras coordinator, “and Santa Cruz will be featured quite prominently, from the very opening shot of the movie.”

“For all those old-time surfers out there who might think this movie is going to tarnish or trash the Santa Cruz surf scene,” said Domhoff, “I’ll just tell you that’s not the case.” The film was originally called “Mavericks,” after the famed surf break near Half Moon Bay on which Moriarity first became known as an uncommonly talented and fearless young surfer.

Later, the title “Iron Cross,” a description of a well-known image of Moriarity wiping out at Mavericks by Santa Cruz photographer Bob Barbour, was considered. But, said Domhoff, the film is still officially untitled.

Leven Rambin (“The Hunger Games” “Grey’s Anatomy”) has been cast as the female lead in “Mavericks,” opposite Gerard Butler and Jonny Weston. Based on the true story of Jay Moriarty’s rise to the forefront of […]