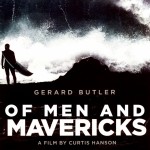 The first poster from the surfer film Chasing Mavericks (previously titled Of Men and Mavericks) has landed online.  Directed by Curtis Hanson, the film stars Gerard Butler as mentor to Moriarty (played by newcomer Jonny Weston), a soul surfer who made his name on the waves over Mavericks in Northern California.

Surfing film ‘Of Men and Mavericks’ lands a Studio

How to Eat Fried Worms Poster

The official poster for How to Eat Fried Worms has been revealed. Click on Read More to see it.