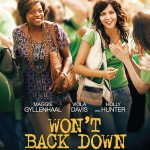 Won’t Back Down will be released on September 28, 2012. The drama, produced by Walden Media & 20th Century Fox, is centered on two frustrated mothers (played by Viola and Maggie Gyllenhaal) who team up to transform an inner-city public school.

Specifically, Viola plays a teacher who risks plenty to join the cause; while Gyllenhaal plays a single mother who sells cars, tends bar and rouses parents to take charge of their grade school.

Rosie Perez as well as Fringe and The Wire star Lance Reddick co-star in the film playing the tough head of the school board (Perez), and Viola Davis’ husband who also happens to be a teacher (Reddick).

Here is a brilliant poster for The Water Horse: Legend of the Deep:

‘Won’t Back Down’ Release Date Moved to September

In what has been the most confusing thing I have ever seen, Walden Media has been renaming this one movie over and over again.  The last time something like this happened, it was with a […]