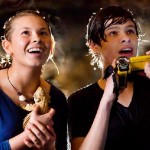 Bindi Irwin, in an exclusive on-set interview, said she instantly related to the lead role of Nim, who lives on a deserted island with her father Jack (Matthew Lillard) and best friends Selkie, a sea lion, and Fred, a bearded dragon lizard.

The 14-year-old said a highlight had been riding the two Sea World sea lions, who share the acting duties, and joked the sea lions “are better trained than me’’.

“Riding underneath the water has been the most incredible experience of my life,’’ she said.

Bindi revealed the last time she came “up-close and personal’’ with sea lions was when she made a documentary with her father Steve Irwin, who was killed by a stingray in 2006.

“I hope to make him (my dad) proud, that’s what I’m striving for,’’ Bindi says.  “When you lose someone whose life was so extraordinary like my dad’s, you have two options: You can curl up in a dark corner…or rise above it and dust yourself off and continue with their work. He will always be with me.’’

Bindi said she wanted to continue with acting especially when there was an environmental message involved. In Nim’s Island 2, inspired by Victorian writer Wendy Orr’s novel Nim at Sea, poachers arrive on the island and kidnap several animals including Selkie. Nim, with the help of new friend Edmund (Toby Wallace of Neighbour’s fame) launches a rescue mission.

“Nim is trying to protect her island and I can relate to that because we are fighting to protect the beautiful pristine area of Steve Irwin Wildlife Reserve in North Queensland which the mining companies are interested in,’’ Bindi said.

Nim’s Island 2 co-producer Paula Mazur is so impressed with Bindi that she hopes to make more Nim’s Island movies starring the talented teenager, who lives at her family’s Australia Zoo on Queensland’s Sunshine Coast. […]