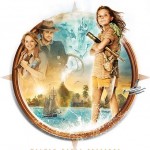 Screen Australia has announced a list of films receiving development support, and on that list is a film that I didn’t know was even being considered: Nim’s Island 2.  The sequel actually has a working title of Nim’s Island: The Return of the Pirates.

The creative team for the sequel isn’t the same group of people that worked on the first film.  The producers are Chris Brown and Tom Hoffie.  The screenwriter is Ray Boseley.  The film will be directed by Brendan Maher.

The website listed this as the synopsis: A sequel to the hugely popular family film Nim’s Island.

That isn’t a lot to go on, and I’m going to reach out to Walden Media to see if this is their production, and if it is at all connected to Wendy Orr’s sequel to Nim’s Island, Nim at Sea.  There’s also no word if any of the original cast will be returning for the sequel.  We can only hope!

Abigail Breslin, 11, was presented with ShoWest’s female star of tomorrow award at the convention’s closing-night ceremony in Las Vegas.