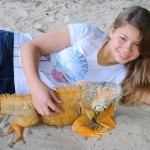 We’ve found more information about the sequel to Nim’s Island. One thing that was kind of surprising, but I sort of expected, was that it appears most of the original cast will not be returning. In fact, currently the only cast member we know of is Bindi Irwin, who was last seen in Free Willy: Escape from Pirate’s Cove, which was the direct to video fourth film in the Free Willy series.  It appears that she will play the role of Nim Rusoe, the role that Abigail Breslin originated.  These are the only other details we’ve managed to find so far.  No word yet on whether Gerard Butler or Jodie Foster will reprise their roles from the original film.

The writer and producer of the smash hit NIM’S ISLAND brings you the much anticipated sequel, RETURN TO NIM’S ISLAND, featuring Bindi Irwin in a wild ride filled with pristine beaches, exotic animals, dastardly pirates, and all your favorite characters from the original.

After his cruise ship discovery of Nim and her beautiful island, Edmund tries to explain the wonder of his find to his classmates only to find that nobody will believe him. Frustrated, Edmund runs away and sneaks aboard the same fateful cruise ship as his last adventure and steals a row boat to make his way to Nim’s Island. At the same time, Nim’s world is turning upside down, as she’s faced with the possibility of having to move to the mainland for her father to pursue his scientific research. Left alone for her last weekend on the island, Nim finds Edmund, as well as the pirate animal poachers that followed him! Soon, Nim and Edmund are in a stealth battle of cunning and wits to rescue her beloved sea lion Selkie. With Nim’s know-how and Edmund’s bravery, they are able to defeat the pirates and maybe even solve the scientific mystery that would allow Nim to stay on her beloved Island.

Nim’s Island 2 co-producer Paula Mazur is so impressed with Bindi that she hopes to make more Nim’s Island movies starring the talented teenager, who lives at her family’s Australia Zoo on Queensland’s Sunshine Coast. […]