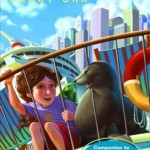 The original Nim’s Island grossed $US48 million in North America and almost $6.2 million at the Australian box office. While it was shot in Queensland, it did not qualify as an Australian production, unlike the sequel which is now underway.

The sequel will be distributed in Australia by Pinnacle Films, which has specialized in limited theatrical releases, while international distribution is being handled by Walden Media.

Producer Paula Mazur said: “Nim’s Island 2 follows our hero Nim into another great action-adventure story that will appeal to cinemagoers of all ages, set in one of the world’s most beautiful locations.”

Nim’s Island 2 is being produced in Queensland at Village Roadshow Studios. The shoot wraps in late-August.

Author Wendy Orr said: “Seeing my book come to life with the first Nim’s Island film was one of the most thrilling and emotional events of my life. Now I’ve just returned from the set of Nim’s Island 2 feeling extraordinarily lucky to have had my book Nim at Sea spark the process again, this time with a great Australian cast and crew – and my animal-loving island girl perfectly embodied by Bindi Irwin.”

Bindi Irwin, in an exclusive on-set interview, said she instantly related to the lead role of Nim, who lives on a deserted island with her father Jack (Matthew Lillard) and best friends Selkie, a sea […]

Bindi Irwin to star in Return to Nim’s Island!

We’ve found more information about the sequel to Nim’s Island. One thing that was kind of surprising, but I sort of expected, was that it appears most of the original cast will not be returning. […]