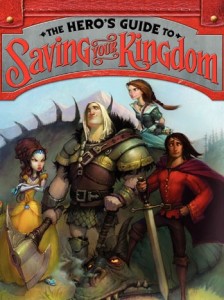 Fox Animation has acquired the movie rights to children’s book The Hero’s Guide to Saving Your Kingdom by first-time author Christopher Healy.

Chernin Entertainment, which produced Rise of the Planet of the Apes, is attached to produce.

The book, which hits shelves May 1, tells the story of the four princes from the classic fairy tales who saved Cinderella, Snow White, Rapunzel and Sleeping Beauty.

In the tome, the princes’ due is glossed over by various minstrels, but the four young men — cast out of their respective castles — get a shot at redemption and glory when they uncover a plot that could destroy the kingdoms.

The 432-page novel from Walden Pond Press/HarperCollins Children’s Books, is the first from Healy, who was a children’s entertainment reviewer as well as a haunted house zombie actor before writing Saving Your Kingdom.

Healy is repped by Hotchkiss and Associates and Jill Grinberg Literary Management.

August 7, 2011 Paul Martin The Hero's Guide to Saving Your Kingdom 0

Walden Pond Press has just acquired a new middle-grade series by debut author Christopher Healy. The first book is called The Hero’s Guide to Saving Your Kingdom.  The series is set in a fantasy world […]