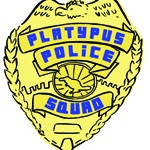 Having unveiled its first list this past spring, HarperCollins’s Walden Pond Press imprint is making a push into Wimpy Kid territory with the acquisition of four books in a heavily illustrated middle-grade series from author/illustrator Jarrett J. Krosoczka. Scheduled to launch in summer 2012, Platypus Police Squad riffs on classic legal dramas and police procedurals—with animals in the starring roles. “We pitched the book as Frog and Toad meets Law and Order,” said Krosoczka. “It’s definitely inspired by the classic buddy cop movies from the ’80s and the hour-long dramas on TV.”
In 2008, the film production company Walden Media switched publishing partners from Penguin to Harper, opening the Walden Pond Press imprint, a joint venture between the companies. Editor Jordan Brown, who took the reins at Walden Pond after the departure of Brenda Bowen in early 2009, signed North American rights to Platypus Police Squad this summer in a deal with Rebecca Sherman of Writers House.

Although the platypuses—officers Rick Zengo and Corey O’Malley—are ostensibly adults (adult animals, anyway) and the books will riff on tropes from films and TV shows aimed at adults, Krosoczka isn’t concerned that kids won’t get the jokes. “At the core, these characters have sort of a big brother–little brother relationship,” said Krosoczka. “Whereas the Lunch Lady books satisfy readers of my picture books, as kids grow out of the Lunch Lady books, they could grow into this.”

Although Platypus Police Squad is Krosoczka’s first series with HarperCollins, he’s not moving away from Knopf, with whom he has published several picture books and the Lunch Lady series of graphic novels. Nor is he moving away from those formats: the fifth Lunch Lady book, Lunch Lady and the Bake Sale Bandit, will be published in December, and Krosoczka is working on a sixth title. And in fall 2011, Knopf will publish Krosoczka’s next picture book, Ollie, about an elephant that moves in with a Brooklyn family.

For Walden Pond Press, Platypus Police Squad represents exactly the kind of project its editors want to publish, according to Brown. “Walden Pond Press has been conscious from the start that the way kids are finding books and reading books and stories is changing drastically,” he explained. “We are acquiring authors and creators who are doing projects that can live in multiple spaces and find kids in multiple ways.”

HarperCollins and Walden Media’s collaboration predates the creation of Walden Pond Press, with Harper’s publishing programs tied to Walden properties, including the Chronicles of Narnia movies, Bridge to Terabithia, and, most recently, Ramona and Beezus. “We have always tried to bring to film projects [a] love of literature, and to make sure kids are reading the books the films are based on,” said Debbie Kovacs, senior v-p and editorial director of Walden Media.

On the film front, one of the most critically acclaimed titles on Walden Pond’s first list, Cosmic by Frank Cottrell Boyce, will be a film from Walden Media; Boyce is working on the screenplay. While Platypus Police Squad could end up at Walden Media, Krosoczka retained film rights to the project, and Eddie Gamarra at the Gotham Group is currently sharing it with screenwriters.

Krosoczka has other film projects in the works as well. His picture book Punk Farm, which had previously been optioned by DreamWorks, is now being produced by an independent animation studio, and last year Universal optioned Krosoczka’s Lunch Lady series, with Amy Poehler attached to star. “I know that side of business can be very finicky,” said the author. “We just continue to keep our fingers crossed here in the Krosoczka household.”

Hank the Cowdog creator in talks at Walden Media

If ever a character could properly portray so many positive characteristics, it’s Hank the Cowdog, one of the most popular literary characters among children and adults.

August 7, 2011 Paul Martin The Hero's Guide to Saving Your Kingdom 0

Walden Pond Press has just acquired a new middle-grade series by debut author Christopher Healy. The first book is called The Hero’s Guide to Saving Your Kingdom.  The series is set in a fantasy world […]