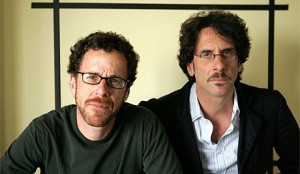 Last year, Angelina Jolie signed to direct Unbroken for Universal and Walden Media.  Now the Coen brothers have been tapped to rewrite Unbroken, the adaptation of Laura Hillenbrand’s 2010 book — which has been trying to mount a Louis Zamperini story in some form or fashion for decades.

After Jolie signed in December, she spent weeks searching for the right writers for the job, and wanted only top-flight talent.  William Nicholson and Richard LaGravenese worked on previous drafts pre-Jolie.

Louis Zamperini was a Los Angeles high school track star who raced in the 1936 Berlin Olympics. In 1943, his Air Force plane crashed in the Pacific. He survived without food and water for 47 days, enduring shark attacks, aerial attacks and hunger before washing ashore on a Japanese island behind enemy lines, where he was held as a prisoner of war for two years and tortured by his captors.

Jolie is producing with Matthew Baer and Erwin Stoff. Walden Media will co-finance.

Among the top screenwriters in town, the Coens have been nominated five times for Academy Awards in the writing category, winning for No Country for Old Men and Fargo. The brothers usually direct and produce what they write, but they take on assignments in rare cases.

Angelina Jolie is in talks to direct the World War II drama Unbroken for Universal Pictures and Walden Media. The film is an adaptation of the 2010 book by Laura Hillenbrand (Seabiscuit: An American Legend) […]

Walden Media has just signed on to co-finance with Universal Pictures the screen adaptation of Laura Hillenbrand’s bestseller Unbroken: A World War II Story of Survival, Resilience and Redemption. The Water for Elephants team of screenwriter Richard […]