Bandslam features the talents of Aly Michalka (half of the duo Aly & AJ, now called 78violet), Vanessa Hudgens (of High School Musical fame) and newcomer Gaelan Connell. Seventeen Magazine sat down with each of them for interviews about the film, and the results are entertaining and down-to-earth. They all seem to have very level heads, and seem like they’d be fun friends to have. 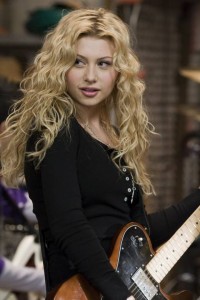 Aly plays Charlotte, the high school “it” girl and lead singer/songwriter of a fledgling rock band. She said, “Charlotte is a very cool character. She’s really funny and witty and is always on her toes and has something to say.”

17: What was it like behind-the-scenes of Bandslam? What sorts of things did you do with castmates Gaelan and Vanessa?
Aly Michalka: We would take breaks during filming and go into Gaelan’s trailer and play Rock Band. Also, Vanessa and I ended up going to get wigs one day while we were on set. She got a blonde wig and I got a brunette wig and we went out to dinner later that night and tried to fool some people. It was fun!

17: In the movie, your character says that it’s good to do things that scare you. Do you have an example of that from your life?
AM: One thing I’m excited my sister and I took a risk on was changing our band name from “Aly & AJ” to “78violet.” That was HUGE for AJ and I! We were scared at first that people might think we were trying to “ditch” Aly & AJ, which we’re so not! We’re still those people, but at the same time, our music has grown. When you listen to our new music, it really does sound like “78violet” – it’s an extension of Aly & AJ and our natural progression towards always wanting to have a band name. We never were able to think of something cool when we were younger. Also, I’m afraid of heights, so skydiving would be a different type of risk I might be willing to take in the future!

17: In the movie, your character Charlotte gives Will (Gaelan Connell) a lot of advice about girls and dating. But what would you say to girls who feel like they’re not cool and can’t get a guy’s attention?
AM: Try to dig deep in yourself and find that confidence that you’re just not letting shine through. I think it’s really important to be an individual, to be comfortable not being afraid of who you are. If you have a different style of dressing, or the way you talk is different, or maybe your taste in music or your taste in friends is different than everybody else, that’s something to embrace!

VANESSA HUDGENS
In Bandslam, Vanessa plays “Sa5m” (the 5 is silent), whom she describes as “moody and standoffish… kind of the outcast in the crowd.” If you can’t already tell by her name, Sa5m definitely does her own thing!

17: Sa5m is a completely new character for you. She’s totally different from the bubbly Gabriella of HSM and your upbeat personality. What was it like playing her?
Vanessa Hudgens: It was a lot of fun! I think the best part about being an actor is playing different characters. So when I heard that she was dead-pan and introverted, I was so in.

17: We heard you had to audition for Bandslam. What was that like – being a big star and all?
VH: I actually audition for everything that I do. I think that’s really important because that’s how you’re supposed to get a job. And I feel like if it’s just offered to you, it’s a little less exciting. You want to be able to compete a little bit! And I completely forgot the fact that I had to come in and sing a song, so I came in completely unprepared, did the scene and they were like, “Okay, what song do you have prepared for us?” and I was like, “Um ­nothing?” Todd [the director] was like “Well, we have sheet music, if you want to look through it.” I found “Rehab” by Amy Winehouse and ended up singing that. And that was the audition.

17: In the film, you and Gaelan have a super awkward kissing scene. What was it like filming that?
VH: In order for us to make it that awkward, we had to do it so many times. I mean, it’s extremely choreographed and it’s all about timing. I’m really happy – I think it turned out great!

17: What was your favorite scene to film?
VH: Probably the performance number because I don’t typically do rock music and it put me out of my element. I think it worked out great for the character because she’s shy and rock music isn’t her forte. I just had so much fun jumping up and down all over the stage belting my heart out!

17: You’ve said before that you were a bad influence on co-star Aly Michalka in terms of shopping. What’s that about?!
VH: (Laughs) I am somewhat of a shopaholic! I think that when two girls are put together, one of them is bound to rub off on the other one, so that was me!

17: How was playing the guitar? It looks like you picked it up pretty quickly for the movie. You looked great!
VH: It definitely took a good second to figure out what I was doing. The whole chord-jumping thing didn’t really come naturally to me, but with practice comes perfection! 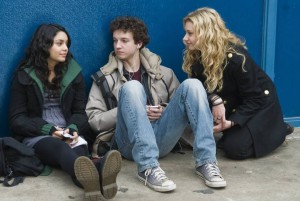 GAELAN CONNELL
Gaelan plays Will, the music-buff who just transferred to a new high school with hopes of escaping a past filled with bullying. Gaelan describes Will as “a pretty awkward teenage boy who knows a great deal about music. He’s got an encyclopedic knowledge of what makes a great song, and that’s why he makes it his mission to form this rock band at his new school.”

17: You were a freshman at NYU when you were cast in Bandslam. How have your friends reacted to the film? Have they seen it yet?
Gaelan Connell: One of my best friends Matt and I went to a screening. So we left, and I was like, “This is weird, what’d you think man?” And he’s like, “There’s this one scene, I think you’re like sitting down at the mall, I thought that was pretty good.” And I’m like, “Dude, thanks!” (laughs) I have two older brothers, and I was driving with one of them talking about the movie and he was like, “Gaelan, no matter what you do, you’re not cool.” (laughs) I guess it’s good my friends and brothers tell it like they see it!

17: Do you have any crazy fan stories from set?
GC: It’s so crazy with Vanessa – she has such a draw! Sometimes people would find out she was filming somewhere and it was like the mini paparazzi! You’d get all these little girls who are like four feet tall who are trying to surround the car and peek over the window – they were everywhere! And you could hear them from like a mile, too!

17: In the movie, Will is attracted to Sa5m’s quirky style. What qualities do you look for in a girl?
GC: Well, I said this last week and it was really stupid: bookish girls are hard to read. Wah, wah, wah. (laughs) There’s this girl across the street that I’ve been trying to meet for years. And I finally just wrote her a letter last week and she totally wrote back – it was awesome!

One of the best, and most highly underrated movies of 2009, Bandslam, is heading to DVD on March 16th! From Walden Media and Summit, it is the story of Will, a normal guy that moves […]

Lisa Kudrow and Liam Aiken join the cast of Will

Lisa Kudrow and Liam Aiken have come aboard to star in “Will,” the musical coming-of-age dramedy that Walden Media and Summit Entertainment will co-finance. David Bowie also is in talks to join the cast, which […]