Congratulations to the little movie that could! Walden Media and Summit’s Bandslam has become a trending topic on Twitter. It’s another great film from Walden Media, and another that isn’t really based on a book. It’s been garnering some pretty great reviews around the web, as it is beating people’s expectations.

The Chicago Tribune had this to say:

“Bandslam” is a pretty good movie, and the odds of its being a pretty bad movie were pretty steep. It sounds like highest-possible-fructose corn syrup: Lonely new kid in town, who pours his heart out in unanswered letters to David Bowie, becomes manager of teen band fronted by cutest girl on planet. If band wins big Bandslam contest, it’s a record deal and fame and so long, high school, it’s been good to know ya.

Here’s the surprise: “Bandslam” may come from synthetic materials, but the characters are a little more complicated than usual. The character roster — privileged cheerleader, deadpan emo, Nerdy McNerdsley, Meathead McMale Model — falls into far less heinous stereotyping than you typically find in this genre. Director Todd Graff, whose earlier “Camp” celebrated teenagers’ mixing it up at a performing-arts camp in the summertime, believes in his material (he co-wrote the script with Josh A. Cagan), and he lets the story breathe, wander and explore a little.

And here’s a screenshot of Bandslam on the Trending Topics on Twitter! 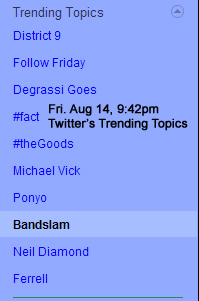 Aly & AJ’s Aly Michalka is set to star in “Will”

In a press release from Hasbro, information was revealed about another star joining the cast of the film: Will.

Lisa Kudrow and Liam Aiken join the cast of Will

Lisa Kudrow and Liam Aiken have come aboard to star in “Will,” the musical coming-of-age dramedy that Walden Media and Summit Entertainment will co-finance. David Bowie also is in talks to join the cast, which […]

Joe Jonas, Kevin Jonas and Nick Jonas of the Grammy-nominated, platinum-selling band, Jonas Brothers, today announced they would team up with Hollywood Records to release Fashionably Late, the debut album from one of this summer’s […]