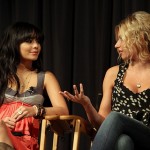 MENC, the National Music Education Association, has been a vocal advocate for the new film BANDSLAM.

In its own words, MENC “believes that music allows us to celebrate and preserve our cultural heritages and also to explore the realms of expression, imagination, and creation resulting in new knowledge.” In BANDSLAM, the young characters express themselves through music: the music of their idols like David Bowie, and the music they create themselves. It plays a central role in their high school experience and the way they perceive the world around them. Main character Will played by Gaelan Connell says in the film “I tend to make snap decisions about people based upon what type of music they like.”

MENC values the cultural role of music, and believes that “every individual should be guaranteed the opportunity to learn music and to share in musical experiences. The mission of MENC is to advance music education by encouraging the study and making of music by all.”

The film’s young stars, Vanessa Hudgens, Aly Michalka and Gaelan Connell spoke out in support of music education at the “BANDSLAM Reel Thinking Event” in May. All three stars are accomplished musicians in their own right, and understand the importance of music in schools. Walden, with the stars of the film, created a special Public Service Announcement for MENC to express our commitment to music education.

Watch the PSA below, and learn more about MENC at menc.org.

To further the cause of music education, Walden also co-wrote free standards-based interdisciplinary curriculum with MENC and the GRAMMY Museum based upon the film. It’s free to download on walden.com, and explores the history of American songwriting, music forms, recording and music’s influence on popular culture.

Henson, Walden, Fox team up for “The Doubtful Guest”

The world of Edward Gorey is coming to the big screen for the first time thanks to Walden Media, Fox 2000 and the Jim Henson Co., which are joining forces to adapt the illustrator-writer’s classic […]

Montecito, Walden Media and Paramount are going on a “Field Trip.”   Montecito, run by Ivan Reitman, Tom Pollock and Joe Medjuck, has dipped into its discretionary fund to pick up a sci-fi-tinged adventure comedy pitch […]