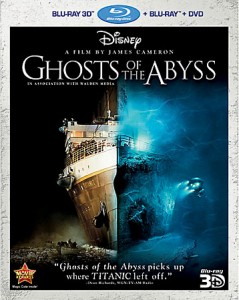 The 2003 documentary comes to Blu-ray 3D with two cuts in September.

In an early announcement to retailers, Disney/Buena Vista has slated ‘Ghosts of the Abyss – 3D’ for Blu-ray 3D on September 11.

For the first time on Disney Blu-ray 3D and Blu-ray 2D, see the real story behind the Titanic and watch this groundbreaking cinematic achievement in a beautiful new digital restoration!

Academy Award®-winning Director and master storyteller, James Cameron journey’s back to the site of his greatest inspiration – the legendary wreck of the Titanic. With a team of the world’s foremost historic and marine experts and friend Bill Paxton, he embarks on an unscripted adventure back to the final grave where nearly 1,500 souls lost their lives almost a century ago. Using state-of-the-art technology developed expressly for this expedition, Cameron and his crew are able to explore virtually all of the wreckage, inside and out, as never-before. With the most advanced 3D photography, moviegoers will experience the ship as if they are part of crew, right inside the dive subs. In this unprecedented motion picture event, made especially for IMAX 3D theatres and specially outfitted 35MM 3D theaters across the country, Cameron and his team bring audiences to sights not seen since the sinking 90 years ago and explore why the landmark vessel – more than any shipwreck – continues to intrigue and fascinate the public.

The Blu-ray 3D/Blu-ray/DVD combo pack will feature both the theatrical (60 minute) and extended (90 minute) cuts in 1080p video, a DTS-HD Master Audio 5.1 soundtrack, and supplements include Reflections from the Deep.

Starring Selena Gomez and Joey King and based on the by Beverly Cleary, Ramona is a little girl with a very big imagination and a nose for mischief. Her playful antics keep everyone in her […]

Bridge to Terabithia on DVD and Blu-ray Today

Bridge to Terabithia is available today on DVD and Blu-ray Disc. Review is coming soon. I give it my highest recommendation though. Just don’t expect it to be like Narnia. It is, and it isn’t. […]

Journey 2: The Mysterious Island – Now Available on Blu-ray and DVD

Earlier this year, Journey 2: The Mysterious Island was released in theaters, furthering the story that began in Journey to the Center of the Earth 3D.  Soon after the release, there were rumors of a […]