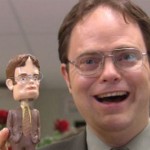 Rainn Wilson is the actor that portrays Dwight Schrute on the American version of “The Office.” He also appears in the upcoming film “My Super Ex-Girlfriend,” along with Luke Wilson and Uma Thurman. The Philadelphia Daily News asked what was next for each of them:

– Next up for star Luke Wilson: “I think I’m going to play Bobby Ewing in the ‘Dallas’ movie.”

At the Central Campus, Principal Kenneth Bass implemented a One School One Book initiative which the students embraced enthusiastically. Every student was required to read Hoot by Carl Hiaasen, about middle-school students in South Florida.

Today, Hoot is available in stores! Be sure to pick up your copy of the DVD. I’m going to be looking at the DVD in the next few days and writing a review of the […]

A book to give a Hoot about

One of the most popular family movies in theatres right now is Hoot, the story of a young man who moves from Montana to Florida with his family, where he’s compelled to engage in a […]