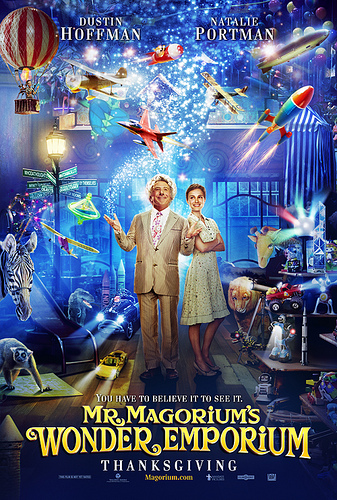 I’m not ashamed to say that Mr. Magorium’s Wonder Emporium is one of my favorite movies.  Running a website called “Walden Fans,” you might think I’m biased because I’m a fan of the company.  You’d be wrong.  I haven’t loved, or even liked, everything that they’ve released.  Far from it.  In fact, there are some films they’ve created that I’ve not even seen for myself, like How to Eat Fried Worms.

That said, there’s currently a lot of news since a character on a show called Breaking Bad ends up in a cabin which only has two DVDs, and both are copies of Mr. Magorium’s Wonder Emporium.  Zach Helm, the writer/director of Magorium said that it’s two more copies than he allows in his own home.  I can understand that, as making a movie, you spend more time with the movie than most people ever do.  He literally spent a year watching the movie a few times a day, every day.  That’d be too much for even the greatest movie ever made.

However, the movie is not… I repeat… is not as bad as people are making it out to be.  It’s a fantastic movie about life and death, change, acceptance, dreams, letting go, and learning who you are and how to reach outside of yourself.  It’s got more depth than most summer movies and more heart than Cars 2. It also has real character development, for every major character in the film, including the store itself.

As Grail Quest Books points out in the comments, it’s also layers-deep on ‘vocation.’  That is quite true.  It features characters that are seeking out their vocations, who know characters that know their own vocations, and know who they are quite well, and those paradigms playing off of each other.

Let’s take a look at the character of Mr. Magorium, as played so every well by Dustin Hoffman.  This is a man that knows every bit of who he is.  He is comfortable being just the man that he is because he has been for quite a long time.  He’s very fond of being childlike, and playing games, and hasn’t forgotten what it’s like to be a kid.  When Magorium talks to the kids in his toy store, he talks to them like kids.  Not down to them, but at their level, and by doing so, gives them respect and earns their respect.  And that respect translates to the advice that he gives to the kids, making it sink in more.  When he tells the lead boy, Henry, at one point in the movie, that he should try to make some friends, it is the respect that Magorium has earned from Henry that makes the advice mean that much more to Henry.

And there is another side to Magorium.  He’s read and understands Shakespeare.  When he talks to other adults, he treats them as adults.  Again, he doesn’t patronize.  He talks to them with the same respect and dignity that is due to every person we talk to.  When he gives Mahoney advice about living, it is a wonderful moment between two adults about life and death, living and dying, in the midst of a children’s movie, that is both wonderfully complex and simple in the same moment.

So give Magorium a chance.  You may just be surprised.

Any questions?  Also, give your feedback, and I’ll likely add to the story.

Alexandre Desplat is set to receive an award this October for excellence in score composition throughout his impressive career. Desplat, a native of Paris, France, has been nominated for two Academy Awards and has composed […]

Imagine attending the World Premiere of Mr. Magorium’s Wonder Emporium! We are offering a chance for this once-in-a-lifetime experience to any registered member of walden.com who is a full-time teacher, librarian, principal, educational paraprofessional, district […]