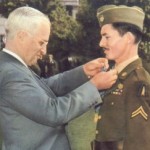 Nearly two years ago, Walden Media president Micheal Flaherty told me the story of a script that he had, which he considered a dream project.  As he told me and others the story, everyone was captivated by it, and I could see it being a truly great film.  That was back in January of 2010.  Today, I am excited to announce, a director has been hired to bring the script to life.

Get Low director Aaron Schneider has been set to direct The Conscientious Objector for Walden Media.

The film tells the true story of Desmond Doss, the first conscientious objector in American history to win the Congressional Medal of Honor. Doss served in WWII, joining the army as a medic. He was ostracized by his fellow soldiers because of his refusal to kill or even carry a gun. He proved his courage, saving 75 men at the Battle of Okinawa.

The script was written by Robert Schenkkan, who wrote the Pulitzer-winning play The Kentucky Cycles and whose script credits include The Pacific and The Quiet American. The film is a co-production between Pandemonium and Permut Presentations, and is being produced by Bill Mechanic, David Permut and Terry Benedict (who directed the 2004 documentary bearing the same title). Steve Longi is co-producer.

Schneider, the veteran cinematographer who won the Oscar for his short film Two Soldiers, made his feature debut on Get Low, and he has been very picky about choosing a followup. The Conscientious Objector is the first thing he said yes to direct. He’s repped by CAA and Anonymous Content. (via)

The Conscientious Objector is a movie that’s been in the works since at least early 2010. A while back it seemed like it was finally going to be moving forward, and now it’s possibly going to have […]