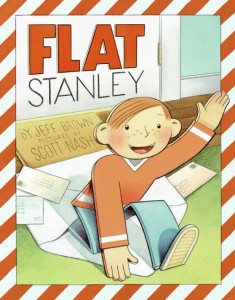 According to Deadline Hollywood, Walden Media has acquired the popular series Flat Stanley to produce a feature film.  The series of children’s books, created in 1964 by Jeff Brown, is about the adventures of a two-dimensional person stuck in a 3D world. The plan is to shoot the film live action, using visual effects to turn the lead character into a two-dimensional hero.

The protagonist is Stanley Lambchop, who, after being given a bulletin board by his father to put above his bed, is flattened by it in the night. He’s OK despite his appearance and can slip under doors and entertain his brother by posing as a kite. He even solves an art heist by posing as a wall painting. The series has sold millions of copies around the world. The film will be produced by John Carls and his Wild Things Productions banner. Carls’ credits include Where The Wild Things Are as well as Rango. Walden Media CEO Michael Bostick and senior veep Evan Turner set up the project and are meeting with filmmakers for the adaptation.