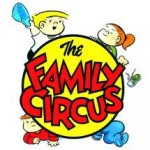 Deadline Hollywood is reporting that Twentieth Century Fox and Walden Media have managed to obtain the elusive rights to the most widely syndicated comic strip in the world: The Family Circus, and have plans to bring it to the big screen in live action!

Here’s the story about how it happened, from Deadline Hollywood:

20th Century Fox has teamed with Walden Media to buy rights to Bil Keane’s venerable syndicated comic strip The Family Circus, and they’ve hired Bob Hilgenberg & Rob Muir to script a live action feature. John Baldecchi and Stacy Maes are producing. Bil Keane started the strip in 1960 and continues to generate the single-panel script with his son Jeff. It is the most widely syndicated strip in the world, according to King Features.

A number of studios competed for the rights for what is envisioned as a multiple quadrant family franchise. Though several members of the Keane clan have become film animators, Bil Keane resisted making a film deal all these years. Producer Baldecchi spent two years trying to track them down. He got Keane’s number, but never had his messages returned. One day, Baldecchi called and Keane picked up the phone. He made enough of an impression that Keane introduced the producer to his son Jeff. Soon they had an agreement to move forward and then studios got involved.

I’m told the deal was six figures against seven-figures and went to Fox and Walden, which are partnered in the upcoming The Chronicles of Narnia: The Voyage of the Dawn Treader.

I’ll be forever grateful to my parents, authors both, for teaching me to read. Not how to read, just to read. In a simpler time, before the internet, before the electronic video games, before cable, […]

The Writer’s Guild of America (WGA) Strike is having a major effect on many film studios, as they are now beginning to lay-off many of their staff. It’s happened at Warner Brothers, and now it’s […]