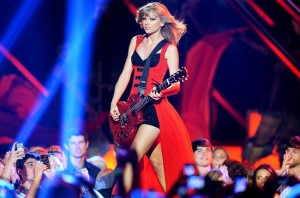 Taylor Swift has joined the cast of The Weinstein Company and Walden Media’s movie adaptation of “The Giver.”

The singer-songwriter is the latest member of the cast that features previously reported stars Meryl Streep, Jeff Bridges, Brenton Thwaites and Katie Holmes.

The film, an adaptation of the popular young adult novel by Lois Lowry, stars Thwaites as a young boy who is selected for life service as the Receiver of Memories. He works with The Giver (Bridges), an old man who teaches the boy to use his sensory gifts.

Streep will play the antagonistic Chief Elder, who assigns the young their tasks, in the film about a society in which there is no sickness, conflict or racism.

The Giver returns to Walden Media, Phillip Noyce to Direct?

Lois Lowry’s book The Giver is inching closer to the big screen.  Many years ago Walden Media had the rights to create the motion picture version of the story.  They didn’t hold on to those […]