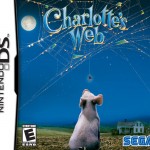 Charlotte’s Web is coming to Nintendo DS, GBA, and PC just in time for the holidays! You’ll be able to play this classic tale just before the release of the Nickelodeon Movies/Walden Media/Paramount Pictures holiday film starring Dakota Fanning, Oprah Winfrey, and Julia Roberts.

In the DS and GBA versions you can play as Wilbur, the pig, or Templeton, the rat. Explore the Zuckerman Farm, the countryside, a junkyard, and the Country Fair. Throughout the journey, you’ll unlock arcade-style mini-games and take on a variety of amusing and complex missions. When you’re not collecting letters of the alphabet to help Charlotte spell out messages in her web, you’ll keep old Farmer Zuckerman occupied by stashing his firewood so he forgets all about your animal friends on the farm.

Walden Media and Paramount’s 2006 live-action version of Charlotte’s Web is getting the high-definition treatment this March, with a release on Blu-ray Disc.  The release date is March 29th. The movie stars Dakota Fanning, Julia […]

It never fails, says director Gary Winick (13 Going On 30). “I say to people I’m doing Charlotte’s Web and they always say, ‘Oh my god, that was my favourite book when I was a […]

“Charlotte’s Web: Wilbur and Friends” is a series of activity-based games meshed together by the retelling of the movie’s story through movie still pictures.