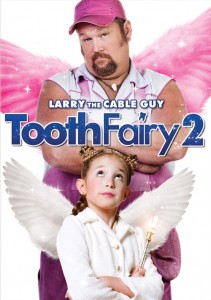 I can’t believe that I hadn’t heard of this until now. A direct to video sequel to 2010’s smash-hit (?), Tooth Fairy, which starred Dwayne Johnson, Billy Crystal and Julie Andrews, has been in production. Tooth Fairy 2 stars Larry the Cable Guy (Cars 2) as Larry Guthrie.

Plot: Tooth Fairy 2 finds Florida car repairman and one-time Metro County Miracle bowling champ Larry Guthrie (Larry The Cable Guy) having one bad day. He just learned his ex-girlfriend, schoolteacher Brooke (Erin Beute), plans to marry his arch-enemy, a local politician (David Mackey). When Larry shows up at Brooke’s after-school program to talk her out of it, his big mouth lands him in trouble as he inadvertently breaks the news to a child that the Tooth Fairy is just a myth. Now, unless Larry collects 20 teeth in 20 days, the Tooth Fairies are going to erase his greatest memory. And unless he can prove to Brooke that he’s a changed man, he’s going to lose her forever.

According to the IMDB listing, Tooth Fairy 2 is scheduled to be released on video in February 2012. It was directed by Alex Zamm, who’s previous direct to video sequels include Beverly Hills Chihuahua 2, Dr. Dolittle: Million Dollar Mutts and Inspector Gadget 2. He’s currently in pre-production on a live action feature film version of the Hannah-Barbera cartoon Hong Kong Phooey which features Eddie Murphy as the voice of the title character and should hit theaters in 2014.