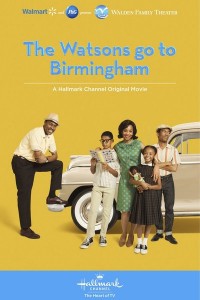 From Walden Family Theater, The Watsons Go to Birmingham is the tale of a summer journey that leaves a family–and a nation–forever transformed.

Kenny serves as the narrator of his family’s journey, an endeavor they’ve embarked upon in direct response to Byron’s recent bad boy antics. Fed up with their elder son’s misbehaving ways, Wilona and Daniel Watson have decided what he needs is a dose of his Grandma Sands’ (Richardson) no-nonsense approach down in Birmingham.

And so the Watsons load up their 1948 Plymouth Brown Bomber, handily equipped with a TrueTone AB-700 Ultra-Glide record player for playing 45s on the road to Birmingham. The family shares plenty of laughs along the way, but once they arrive, a quick tour of the town from Grandma Sands and her friend Mr. Robert (Grier) is all it takes to reveal that life is very different here than in Flint. During that historic summer, the Watsons find themselves caught up in something far bigger than Byron’s antics. Something that will change their lives forever.

Watsons has been faithfully adapted for the screen by accomplished children’s book author and screenwriter Tonya Lewis Lee, who, along with Nikki Silver, serves as executive producer. The film is directed by Tony Award nominee Kenny Leon and produced by Phil Kleinbart.

Produced by Walden Media, ARC Entertainment and Tonik Productions, LLC, in association with Walmart and P&G, The Watsons Go to Birmingham premieres Sept. 20 on Hallmark Channel.

Watch for weekly posts on our website celebrating all things Watsons: behind-the-scenes peeks at the making of the film; interviews with cast and crew; and a regular series on key civil rights milestones as we commemorate this 50th anniversary of the watershed year 1963.

And make sure the gas tank’s full.