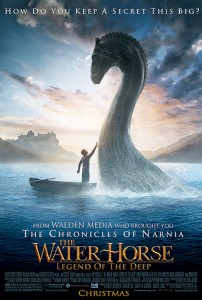 It’s time to stand up for the little guys.

The Academy Award®-winning producer and special-effects team behind “The Lord of the Rings” join with Revolution Studios, Walden Media (“The Chronicles of Narnia”) and Beacon Pictures to bring to the screen the magical motion picture “The Water Horse: Legend of the Deep.”

The story begins when Angus, a young Scottish boy, finds an enchanted egg. Taking it home, he soon finds himself face-to-face with an amazing creature: the mythical “water horse” of Scottish lore. Angus begins a journey of discovery, facing his greatest fears and risking his life to protect a secret that would give birth to a legend.

“Back Where You Belong” by Sinead O’Connor, for The Water Horse