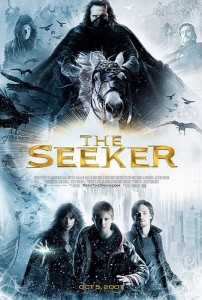 Even the smallest of light… shines in the darkness

A boy’s life is turned upside down when he learns that he is the last of a group of immortal warriors who have dedicated their lives to fighting the forces of the dark.

Based on the acclaimed novel by Susan Cooper, THE SEEKER is the first film adaptation of the author’s acclaimed The Dark Is Rising Sequence. The film tells the story of Will Stanton, a young man who learns he is the last of a group of warriors who have dedicated their lives to fighting the forces of the Dark. Traveling back and forth through time, Will hunts for a series of mysterious clues and encounters forces of unimaginable evil. With the Dark once again rising, the future of the world rests in Will’s hands.

THE SEEKER is directed by David L. Cunningham, best known for directing the ABC-TV miniseries, The Path to 9/11. The screenplay is by John Hodge, the Academy Award® nominated writer of Trainspotting. Hodge is known for his long-time collaboration with director Danny Boyle, beginning with 1995’s Shallow Grave, and continuing with Trainspotting, A Life Less Ordinary and The Beach.

First published in 1973, The Dark Is Rising received numerous awards, including the Newbery Honor Award by the American Library Association in 1974 and the Boston Globe Book Award in 1973. It is the second in a series of five books that also includes Over Sea, Under Stone (1965), Greenwitch (1974), The Grey King (1975, winner of the 1976 Newbery Medal) and Silver on the Tree (1977). In addition to the Newbery awards, the books in the series have won numerous other awards, including two Carnegie Honor Awards in Britain and the Tir na n-Og Award of Wales for The Grey King. The Dark Is Rising Sequence has been translated into twelve languages and has been read by over 100 million readers worldwide since its publication.