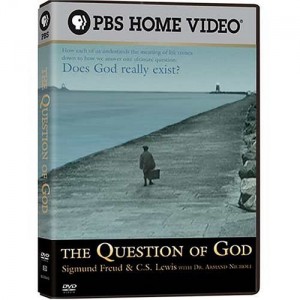 How each of us understands the meaning of life comes down to how we answer one ultimate question: Does God really exist?

The Question of God, a four-hour series on PBS, explores in accessible and dramatic style issues that preoccupy all thinking people today: What is happiness? How do we find meaning and purpose in our lives? How do we reconcile conflicting claims of love and sexuality? How do we cope with the problem of suffering and the inevitability of death? Based on a popular Harvard course taught by Dr. Armand Nicholi, author of The Question of God, the series illustrates the lives and insights of Sigmund Freud, a life-long critic of religious belief, and C.S. Lewis, a celebrated Oxford don, literary critic, and perhaps this century’s most influential and popular proponent of faith based on reason.

“It may be that Freud and Lewis represent conflicting parts of ourselves,” Dr. Nicholi notes. “Part of us yearns for a relationship with the source of all joy, hope and happiness, as described by Lewis, and yet, there is another part that raises its fist in defiance and says with Freud, ‘I will not surrender.’ Whatever part we choose to express will determine our purpose, our identity, and our whole philosophy of life.”

Through dramatic storytelling and compelling visual re-creations, as well as interviews with biographers and historians, and lively discussion, Freud and Lewis are brought together in a great debate. “The series presents a unique dialogue between Freud, the atheist, and Lewis, the believer,” says Catherine Tatge, director of The Question of God. “Through it we come to understand two very different ideas of human existence, and where each of us, as individuals, falls as believers and unbelievers.”

The important moments and emotional turning points in the lives of Freud and Lewis – which gave rise to such starkly different ideas – fuel an intelligent and moving contemporary examination of the ultimate question of human existence: Does God really exist?

The Question of God is produced by Tatge/Lasseur Productions in association with WGBH and Walden Media.

All over the world, people are asking the same questions: Why is there so much pain and suffering in the world? What does it mean to be happy? Is there such a thing as evil? Does God really exist? This September, through the brilliant minds and personal struggles of two of the most influential thinkers of the twentieth century, PBS presents an emotional and intellectual journey into the meaning of life.

About Part One The Question of God Part I presents the early stories of C.S. Lewis and Sigmund Freud, two men with very different ideas of human existence. In childhood, each embraced the religion of his family. But the early death of Lewis’s mother, and the horrors he witnessed in the First World War tested his faith. In middle age, Lewis found his once-passionate atheism troubling, and began searching for faith again. Freud, studying medicine in the age of Darwin, found he had no use for a creator. As he developed his theory of psychoanalysis, he came to see belief in God as just another human fantasy.

To grapple with the questions raised by the lives and ideas of Freud and Lewis, Dr. Armand Nicholi leads a panel of seven thoughtful men and women in a wide-ranging discussion of some of the fundamental questions. What influences us to embrace or reject religious belief? Is the scientific method, as Freud wrote, the only path to the truth? Does the human longing for God, as Lewis wrote, actually prove that God exists? Do miracles actually happen?

About Part Two As Freud and Lewis entered middle age, their divergent beliefs about the existence of God were fixed. But tragedy would test each man’s convictions. For Freud, it was the terror of the Third Reich and the death of a beloved daughter. For Lewis, in his fifties, the brief happiness of new romance was turned to ashes with the untimely death of his wife, igniting the greatest spiritual crisis of his life. Yet in the end, each man confronted his own death with his beliefs intact.

Dr. Armand Nicholi and his panel continue their debate, exploring the implications of choosing a spiritual or secular worldview for the primary questions of life – of love, morality, suffering and death: From where do we get our concept of right and wrong – from the Creator or from human experience? How do we square the existence of an omnipotent, all-loving God with all of the evidence of evil and suffering in the world? How do these starkly different worldviews help us resolve the riddle of death?