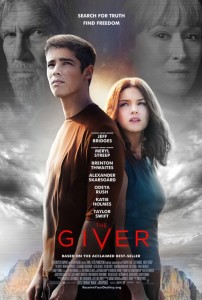 Based on the book by Lois Lowry, The Giver is produced by Walden Media and the Weinstein Company, and features Jeff Bridges, who originally bought the rights with his father in mind for the role he’ll be filling.

In an insular society known as The Community, a culture of “sameness” is embraced. Pain and suffering have been eradicated from daily life, along with any notion of individuality or choice. Members of the Community lead a seemingly perfect existence, unburdened by the harsh realities of the “real” world. A lone man among them has been designated to retain all memories of the way life once was. Now the time has come for that man to pass his knowledge to another.

“It’s all there. The boy. The old man. The baby. The sled. If you loved the book, take my word for it – you’ll love the movie as well.”

-Lois Lowry, author of The Giver

The haunting story of THE GIVER centers on Jonas (Brenton Thwaites), a young man who lives in a seemingly ideal, if colorless, world of conformity and contentment. Yet as he begins to spend time with The Giver (Jeff Bridges), who is the sole keeper of all the community’s memories, Jonas quickly begins to discover the dark and deadly truths of his community’s secret past. With this newfound power of knowledge, he realizes that the stakes are higher than imagined – a matter of life and death for himself and those he loves most. At extreme odds, Jonas knows that he must escape their world to protect them all – a challenge that no one has ever succeeded at before. THE GIVER is based on Lois Lowry’s beloved young adult novel of the same name, which was the winner the 1994 Newbery Medal and has sold over 10 million copies worldwide.

Distributed by: The Weinstein Company