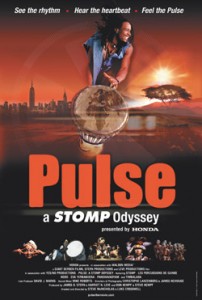 Discover the Universal Language of Rhythm

Pulse: a STOMP Odyssey is a celebration of the global beat, an exploration of the sights and sounds of continents and cultures, guided by the internationally acclaimed performers of the sensational stage show STOMP. Audiences will travel a world brought brilliantly alive on the large-format screen and will discover the universal language of rhythm.

The film is a unique and extraordinary large-format film experience — a visual and auditory celebration of diversity and culture, rhythm and humanity. It introduces audiences to percussion groups from locales and backgrounds as disparate as Timbalada of Brazil to the Kodo drummers of Japan, from the American Indian Dance Theater to the Jackie Robinson Steppers of New York.

While providing stunning large-format visuals and unparalleled sound recorded live on location, the film chronicles a world without boundaries or prejudices and provides a striking example of the global spirit that is a common thread within all of us. Its message and energy serve as an outstanding, and of course timely, reminder about a fundamental harmony that can exist across time, space, and society.

“We started out making a film about rhythm and it evolved into a film about humanity,” McNicholas said. “Every culture has music, but the root of every form of music is rhythm, and rhythm is common to everyone.”

The film is not simply inspired by STOMP. Rather, the film features many of the rhythms and cultures that served as the inspiration for STOMP in the first place. One of the most successful and highly acclaimed shows in the history of the New York stage, STOMP has toured throughout North America and the world to rave reviews and sold-out performances. Since beginning its New York run in 1991, the show has performed in more than 350 cities in 36 countries worldwide.

In making Pulse: a STOMP Odyssey, Cresswell and McNicholas felt it important that the film not replicate the stage show, but rather take advantage of the large-format medium to take audiences on a journey to experience the richness and diversity of the world’s rhythm, music, dance and cultural events. Their goal was to not only get children and adults to listen to the world differently — as STOMP itself has done — but also to see the world as one.

“The IMAX format gave us the opportunity to really make a spectacle, not only because of the film’s large format, but also because of its high quality sound system,” Cresswell said. “IMAX gives the audience the same viewpoint we had when we were physically there on location. It’s much more of a theatrical medium than regular film, so for this project it works incredibly well.”

“The whole journey is done through rhythm alone, just like in STOMP,” adds McNicholas. “Everyone has a heartbeat…fundamentally, there is a rhythm that binds everything and everyone together. If we can take an audience from Manhattan to Brazil to Africa to India and just do it through rhythm and movement and colors, I think that can send a strong message. It is not just crossing rhythms, it is crossing cultures.”