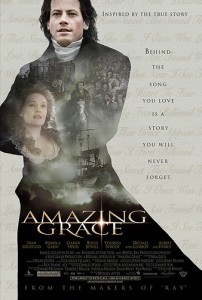 Behind the song you love is a story you will never forget.

Amazing Grace is based on the true story of William Wilberforce, a British statesman and reformer from the early part of the 19th century. This feature film will chronicle his extraordinary contributions to the world, primarily his 20-year fight to abolish the British slave trade, which he won in 1807. He was also instrumental in passing legislation to abolish slavery in the British colonies, a victory he won just three days before his death in 1833.

Filming of Amazing Grace began on October 29, 2005 on location across England. In their commitment to faithfully recreating Wilberforce’s life, they shot at locations across England, including the Gloucester docks, Trafalgar Park, Hampton Court, and Parliament Square. The locations are not only historically accurate, they are also visually stunning. Near the beginning of production, filmed inside Parliament, and wrapped the production at Westminster Abbey in January.