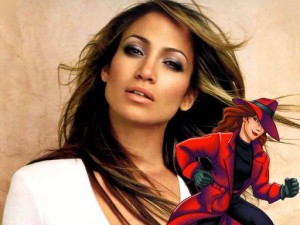 Walden Media keeps acquiring the rights to fantastic properties, and this one could prove to be another winner for them.  Where in the World is Carmen Sandiego? is an educational computer game series that is used in classrooms across the country.  It’s inspired a children’s game show, that was kind of like Jeopardy! in format, and featured the a Capella group Rockapella doing vocals for the theme song.  There was also a more popular cartoon series called Where on Earth is Carmen Sandiego?

Now the property is in development for the silver screen as a potential starring vehicle for Jennifer Lopez, though she’s currently only attached to produce the film.

Here’s the logline for the film: When the ACME agency’s greatest detective Carmen Sandiego becomes the world’s greatest thief, it’s up to her former partner to follow her clues and track her down. Their cat-and-mouse game leads the partner to confront a greater mystery: Is Carmen really a thief or a hero?

The film will be produced by Jennifer Lopez and her Nuyorican Productions’ partners Benny Medina and Simon Fields, and Underground Films’ Nick Osbourne, Trevor Engelson and Devin Andre. Walden Media CEO Michael Bostick and SVP Evan Turner are steering the property after it was acquired from Hougton Mifflin. The property fits into Walden Media’s mandate to create properties that challenge kids; Carmen Sandiego is used as a teaching tool in more than half of elementary schools nationwide. (via)