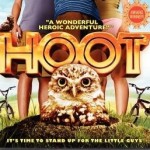 The DVD of the movie Hoot, which was partially filmed in Boca Grande in July of 2005, hit store shelves this week with a host of special features – including “backstage” interviews that shine the spotlight on the island.

It’s fair to say you won’t go blind looking for Boca Grande (which doubled as the fictional locale of Coconut Cove) on this enhanced version.

“The look of Coconut Cove was terrific,” said Wil Shriner, who directed, co-produced and wrote the screenplay for the movie. “Boca Grande served as a town from the air, the sea – and Journey’s End served quite well as (hero) Roy’s house.”

Hoot, based on the Newbery award winning book by Florida author Carl Hiaasen, began shooting in Boca Grande on July 10, 2004. The cast and crew remained on the island through July 15 and headquartered themselves at the Gasparilla Inn.

The movie features a commentary by Shriner and Hiaasen that focuses on the locations, the actors and the story line. And also the film’s tight budget.

“The studio asked if there was no such house like Journey’s End in Fort Lauderdale (where most of the shooting for the film took place). “No, there’s not,” was Shriner’s reply.

Shriner said this week that the Boca Grande scenes were important to the texture of the film which sought to convey the beauty of “Old Florida.”

Mr. Magorium Headed to Blu-Ray and DVD on March 4!

This is an excellent film that I have now seen at least 3 times. At least. I just loved it. And this news really excites me all the more!

From the makers of Ray, AMAZING GRACE tells the inspiring story of William Wilberforce and his passion and perseverance to pass a law ending the slave trade in the late 18th century. Several friends, including […]

The Seeker comes to DVD on March 18

Fox Home Entertainment has officially announced The Seeker which stars Alexander Ludwig, Ian McShane, Frances Conroy, and Christopher Eccleston. This David L. Cunningham directed fantasy will be available to own from the 18th March, and […]