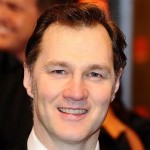 Jay Russell (Ladder 49) is directing the film based on the children’s book by Dick King-Smith; according to The Hollywood Reporter, the film centers on a Scottish boy (Etel) who finds a mysterious egg on the shore of a loch. When the egg hatches, a water horse emerges, and the boy must find ways to protect the rapidly growing creature from those who see it as a threat. Morrissey will play Captain Hamilton of the Royal British Army whose troop has commandeered a small diner run by the boy’s mother (Watson).

Robert Nelson Jacobs is adapting The Water Horse screenplay; production is set to begin next month; a 2007 release is scheduled.

Sony Pictures just posted the first of what will be 18 video blogs posted every week on the Official Water Horse website. Get behind the scenes of The Water Horse with Director Jay Russell and […]

Insight into Walden Media’s Micheal Flaherty, from his Brother

It is exactly one year ago since the whole process started. My agent (ICM) had been on the phone to say that an American director called Jay Russell wanted to see me about a new […]