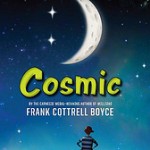 We’re going to be running a contest to win a copy of Cosmic very soon.  Keep your eye’s on us, as we’re working on how the contest will work.  We have five copies to give away, and are very excited about this book.

Liam has always felt a bit like he’s stuck between two worlds. This is primarily because he’s a twelve-year-old kid who looks like he’s about thirty. Sometimes it’s not so bad, like when his new principal mistakes him for a teacher on the first day of school or when he convinces a car dealer to let him take a Porsche out on a test drive. But mostly it’s just frustrating, being a kid trapped in an adult world. And so he decides to flip things around. Liam cons his way onto the first spaceship to take civilians into space, a special flight for a group of kids and an adult chaperone, and he is going as the adult chaperone. It’s not long before Liam, along with his friends, is stuck between two worlds again—only this time he’s 239,000 miles from home.

Frank Cottrell Boyce, author of Millions and Framed, brings us a funny and touching story of the many ways in which grown-upness is truly wasted on grown-ups.

We’re giving away THREE copies of Bridge to Terabithia on DVD! We’re going to be adding some video clips of the film shortly. It’s a great film that you are sure to enjoy, and for […]

Imagine attending the World Premiere of Mr. Magorium’s Wonder Emporium! We are offering a chance for this once-in-a-lifetime experience to any registered member of walden.com who is a full-time teacher, librarian, principal, educational paraprofessional, district […]

Frank Cottrell Boyce to adapt Cosmic for the Big Screen

Walden Media’s going “Cosmic,” signing Frank Cottrell Boyce to adapt his children’s novel for the bigscreen. Liam has always felt a bit like he’s stuck between two worlds. This is primarily because he’s a twelve-year-old […]