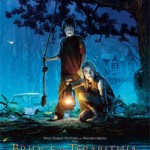 Watching Bridge to Terabithia, the first thing you notice is that it’s not a fantasy film, but a very character and family driven film. The film takes place in Lark Creek, a small town somewhere in the southern United States. Filmed in New Zealand, it has many beautiful landscapes and the wilderness to bring the world to life.

The actors are fantastic in the film, and once you get a handle on the set pieces and how they act, and the roles that they have, the movie really takes off. It features a young boy named Jess, who has no friends and the new girl that comes to town, Leslie Burke.

Leslie is a charismatic girl with a very active imagination, creating an imaginary world with action and excitement. It is her pure enjoyment and sense of adventure makes her so endearing.

The two have a rough start to what becomes the friendship of their lives. They work together and grow together over the following months, each learning from one another.

There are many lessons to be learned from this film, including some very heavy ones that make this one to watch with your family, and to talk about afterword.

I very highly recommend this film to anyone. I wish that I could say more about it, but I don’t want to for fear of spoiling the element of surprise that this movie has. It’s something that hits very hard at your core.

I just think that you should all see it as soon as you can. I’ll be seeing it again on Friday. After that, I might write a spoiler filled review. It’ll be hard for me to do so, though. This film affected me very deeply.

Denver’s AnnaSophia Robb may be only 13, but the fine young actress already has seven movies under her belt and an eighth under way. Robb has kept some pretty strong company: Johnny Depp, Charlize Theron, […]

Josh Hutcherson and AnnaSophia Robb created a magical world as the main characters in “Bridge to Terabithia,” but off-camera they were enchanted by their real shooting location, New Zealand, where they spent three and a […]