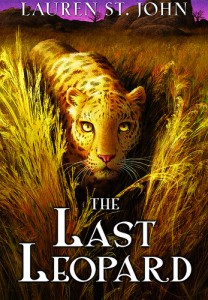 Lauren St. John began writing The Last Leopard after learning about a rise in the hunting and killing of leopards in Zimbabwe. Khan, the leopard in this story, is based on a real leopard currently living in an animal sanctuary in Harare.

Look for The Elephant’s Tale, the fourth and final thrilling African adventure in The White Giraffe series, in spring 2010.