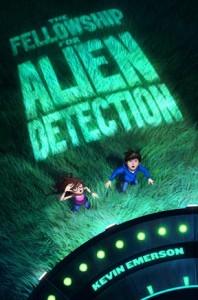 Juliette, Arizona is missing, and so is eleven-year-old Pennsylvania resident Suza Raines. Most people believe Suza was kidnapped, but there are others who are convinced something even more sinister is going on…The night Suza vanished, everyone in her town dreamed they were being taken into space. And it turns out they were not alone. People in towns across the country have been having the same dreams…and it’s only getting worse.

Enter Haley and Dodger, two kids from opposite sides of the country who believe there is one explanation for these strange events: aliens. Having each been awarded a Fellowship for Alien Detection (a grant from a mysterious foundation dedicated to proving aliens exist), Haley and Dodger and their families set off on a cross-country road trip to prove their theories. They soon realize that the answers to their questions lie in the vanished town of Juliette, AZ, but someone…or something… is doing everything in its power to make sure they never reach Juliette. If Haley and Dodger don’t act quickly, more people may go missing, and the world as we know it will change for the worse.

Independence Day meets Holes in this exhilarating and fast-paced read from Kevin Emerson. Fans of Philip Reeve’s Larklight or Adam Rex’s The True Meaning of Smekday will find something to love in The Fellowship for Alien Detection.