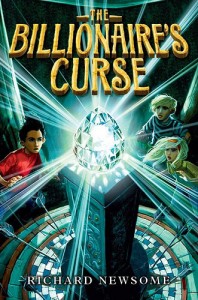 Gerald Wilkins is pretty much your average twelve-year-old. That is, until he inherits twenty billion pounds, a Caribbean island, a yacht, and three houses from a great aunt he never knew, much to his extended family’s frustration. Still, things could be worse. And they’re about to be. First, there’s the theft at the British Museum, mysteriously coinciding with his aunt’s death. Then, there’s the oddly sinister man dressed in black who seems to be following Gerald everywhere. And finally, there’s the letter. The one from his great aunt. The one meant only for his eyes.

“Hello Gerald. I hope this isn’t too weird for you-a letter from beyond the grave! By now you are my heir and worth a good deal of money. I hope you don’t mind. I have a favor to ask. I am told you are a bright chap. I know we never met, but your mother kept me up to date on your achievements and whatnot in her letters. So I expect you’ve figured out that I was murdered. I want you to find out who did it.”

Along with his friends Ruby and Sam, Gerald embarks on a journey—one that will lead him from the British Museum to secret places hidden far underground. His great aunt was murdered in pursuit of an object of great power. And unless Gerald, Sam, and Ruby can find it before the killer does, they may be next.