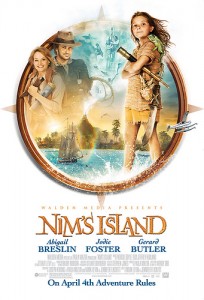 We had the opportunity to interview Nim’s Island author Wendy Orr. We took that chance, and she very graciously answered 20 quesions for us. Enjoy!

WaldenFans.com: Tell us a bit about yourself, for our readers that might not know much about you.

Wendy Orr: I was born in Canada, grew up in Canada, France, and the USA but married an Australian while studying occupational therapy in London, UK, and so have lived in Australia ever since! My husband Tom and I have a grownup son and daughter. I started writing 20 years ago and have written picture books and novels for young adults and adults as well as my main genre of junior novels, like Nim’s Island.

WaldenFans.com: Can you give us a quick teaser for Nim’s Island that will give us an idea of what we’re in for?

Wendy Orr: Nim and her scientist dad, Jack, live an eccentric but idyllic existence on a tropical island. When Jack sails off on a two day plankton-finding excursion, Nim is happy to be alone with her animal friends, including sea lion Selkie and lizard Fred. However a violent storm comes up and Jack’ s boat is damaged, losing its mast as well as his satellite dish, so that he can’t return to Nim or communicate with her. Meanwhile Nim answers an email from Alex Rover, the world’s most famous adventure writer, and when she is injured attempting to answer Alex’s research question, turns to the adventure hero for help. Unfortunately the real Alex Rover is in fact an agoraphobic woman, who must also draw strength from her own fictitious hero and face her fears to try to rescue Nim.

WaldenFans.com: What were your inspirations for the story of Nim’s Island?

Wendy Orr: There are really two parts to her creation. I started playing with the idea of a girl writing to an author when I received two letters one week from girls who wanted me to write a book about them. I had to tell them that I simply can’t work like that – the ideas for a book have to spring from my own imagination, but that they should think about writing their own stories. However, the letters started me on a writer’s favourite game: what if. So… what if an arrogant author brushed off a little girl whose life was in fact much more interesting than anything the author could invent?

I played with this idea for quite a while, several months or a year, and it became clear to me that the reason the girl’s life was so interesting was that she lived on an island. It still took ages to come to life, until on about the tenth draft, I suddenly remembered and really relived a story I wrote when I was 8 — about a little girl who ran away from her orphanage to live alone on Spring Island. That story was inspired by my fascination with two tiny islands we used to pass on the ferry going to visit my grandparents on Vancouver Island. I absolutely longed to live on one of them! But maybe because I knew it wasn’t going to happen, or maybe because I’ve always been a story teller, the girl I saw living there wasn’t me, in my family; she was an extraordinarily brave, capable and inventive girl. And, probably because I had just read and loved Anne of Green Gables, it was obvious to me that she was an orphan. And so, 35 years later, when I put myself back into the story I’d written when I was 8, Nim came to life and appeared on the page pretty much as you see her now.

WaldenFans.com: What themes did you try to convey in the story?

Wendy Orr: I never set out to convey any particular theme in a book, and don’t tend to realize what the themes are until a later draft. The main themes that I think I was drawing on for Nim’s Island were that we are all capable of much more bravery, competence, and strength than we think we are, especially if we’re trying to help someone we care about; and that we all need other people to love.

WaldenFans.com: Have you seen the film version yet?

Wendy Orr: Yes, first at the Australian premier on March 20, then at a preview at the Public Libraries Conference in Minneapolis, and at the LA premier on Sunday March 30.

WaldenFans.com: How do you feel about your characters coming to life?

Wendy Orr: Thrilled – and amazed at how much each of the actors embodies their character.

WaldenFans.com: What was it like to see your imagination on the big screen?

Wendy Orr: Beyond wonderful. The strength of my emotional response still surprises me; the experience is quite surreal.

WaldenFans.com: When and why did you begin writing?

Wendy Orr: I started writing in 1986. I’d always wanted to write, and when a friend at work told me one day that she’d written a book, my gut response was, ‘So when am I going to do that?’And so I started!

WaldenFans.com: When did you first consider yourself a writer?

Wendy Orr: A good question! When my fourth book, Leaving it to You, was shortlisted for the Australian Children’s Book Council Awards. I felt that must mean that I could say I was a writer without anyone laughing!

WaldenFans.com: What inspired you to write your first book?

Wendy Orr: My first year of writing, I experimented with lots of different genres to see what I really wanted to do. At the end of the year I saw a Scholastic competition for a picture book text – no illustration. At that time my children were tiny; I was immersed in picture books but had never thought of writing one because I’d thought one would need to be able to draw as well as write. My children were fascinated by dinosaurs at that stage, and so somehow I came up with Amanda’s Dinosaur – which won the competition and was published.

WaldenFans.com: How did you come up with the title?

Wendy Orr: The name Nim came from searching for an unusual name that would suit this strong, unique little girl. As I’d already established the importance of coconuts in the story, I researched words for coconut and discovered niu. It didn’t seem quite right as a girl’s name, and my editor suggested playing with it and making it Nim. Once the girl’s name was set, there didn’t seem to be anything else I could call the book.

WaldenFans.com: Are experiences based on someone you know, or events in your own life?

Wendy Orr: A couple are loosely based on stories people have told me of incidents in their own lives (Too Much Stuff! and Across the Dark Sea) and two on my own life (Yasou Nikki, and Peeling the Onion.) Most seem to be entirely fiction – but everything I write must come from somewhere inside me, as do my characters.

WaldenFans.com: If you had to choose, which writer would you consider a mentor?

WaldenFans.com: Are there any new authors that have grasped your interest?

Wendy Orr: So many I hesitate to name them!

WaldenFans.com: What are your current projects?

Wendy Orr: Next week I need to go through my editor’s notes and do a final draft on the third book in the ‘Mokie and Bik’ series. I then need to finish the working draft of Lost Dog Bear, the first book of a series loosely based around an animal shelter, so that it can go to the illustrator. I also need to go through the notes for a picture book, One Night, which is at an early stage of illustration. There are also three other books in various stages of manuscript and gestation, and two film projects which are too early to discuss.

WaldenFans.com: Who designed the covers?

Wendy Orr: The designer at each publishing house does the cover. I intend to have them up on my website: www.wendyorr.com, but for now many of them are up on www.myspace.com/wendyorr

WaldenFans.com: What was the hardest part of writing Nim’s Island?

Wendy Orr: Getting the tone right. It was about the twelfth draft before that happened.

WaldenFans.com: Did you learn anything from writing Nim’s Island and what was it?

Wendy Orr: That if you go on redrafting long enough you’ll find the story you’re looking for.

WaldenFans.com: Do you have any advice for other writers?

Wendy Orr: Write what you care about, not what you think will sell. And go on rewriting till it’s as perfect as that story can be.

WaldenFans.com: Do you have anything specific that you want to say to your readers?

Wendy Orr: Live life to the full – but go on reading too!

WETA’s Matt Aitken Walks Us Over the Bridge to Terabithia

From the imaginations of AnnaSophia Robb and Josh Hutcherson, comes the new film, Bridge to Terabithia. But, those creatures didn’t just come out of no where – the good people at WETA worked tirelessly to […]